The human gastrointestinal tract contains billions of living microorganisms, including bacteria, which constitute the intestinal microbiota or flora. Most of these microorganisms are found in the colon, the major component of the large intestine. The human intestine is therefore a true ecosystem for the efficient absorption of nutrients and minerals, reinforcement of defenses against pathogenic viruses or bacteria, regulation of intestinal transit, and, consequently, for the maintenance of general health. Hence, it is necessary to maintain the balance of the intestinal flora to prevent the diverse daily situations that can represent a stress, and, therefore, a potential cause of an imbalance.

Probiotics are live microorganisms that when consumed in adequate doses help maintain the balance of the intestinal flora, thus having beneficial effects on host health and preventing various diseases. Not surprisingly, in the last years there has been an increasing interest in the consumption of probiotics and in developing foods including them.

The Lactobacillus and Bifidobacterium bacterial genera are the most widely used as probiotics, namely as part of many foods (both fermented and unfermented) or as ingredients in pharmaceutical products in the form of nutraceutical dietary supplements.

Probiotic production requires going through different processes before being marketed and consumed or added to any food, such as freezing, lyophilization, spray drying. These processes cause various types of stress, affecting both the viability and the functional properties of bacteria. In addition, when ingested, probiotic bacteria must pass through the entire digestive system in order to reach the colon in enough amounts to exert their beneficial action. Nowadays, bacteria must face adverse conditions such as the degree of acidity (pH), the concentration of bile salts, the time of exposure, among others.

Currently, with the objective to prevent the low survival of probiotic bacteria during and/or after their production and also after their digestion, different strategies exist, the microencapsulation being one of the most used approaches.

There are many techniques to perform an encapsulation of bacteria. Most of them are based on bacterial immobilization in materials that remain intact for an appropriate period and then degrade in the colon for the release of probiotics in its place of action. Biopolymers (i.e. natural macromolecules made up of repeating units of one or more small repeating units, the so-called monomers) can be used to encapsulate probiotics due to their good biocompatibility, non-toxicity, and controlled release properties. The main function of the polymeric matrix is to provide a physical barrier to protect microorganisms.

One of the most widely used approaches to obtain microcapsules is ion gelation. This technique uses anionic (negatively charged) biopolymers, which in combination with cations (positively charged atoms) such as calcium or iron among others, induce the formation of a structured gel. This effect leads to the formation of a capsule that can contain bacteria. (See Fig. 1 and Fig. 2. Adapted from [ref. 1] and [ref. 2], respectively).

Layer-by-Layer (LbL) encapsulation is one of the most used and easiest techniques in bacterial encapsulation. It was developed by Decher in 1997 [ref.3] and involves the sequential deposition of oppositely charged (preferably natural-based) polyelectrolytes onto the bacteria. Because bacteria have a negative surface charge, the interaction between the bacteria and the first layer is achieved using a cationic (positively charged) polymer; for the second layer, an anionic (negative) polymer is used, and so on. The number of layers to be applied depends on a trade-off of factors such as the preservation of the bacteria viability under adversities that they must go through, the biodegradation ability of the enveloping polymers in the colon, or the achievement of the desired release of the probiotic bacteria that warrants their beneficial action. (See Fig. 3).

Quintana, G., et al. studied the physical barrier functionality of the encapsulation. In Fig. 4 (adapted from [ref.4]). It is possible to observe that the permeability of a bacterial strain before and after LbL encapsulation with two different polymers denoting a significant reduction in the internalization of high-weight molecules after encapsulation (green fluorescence) while the internalization of low weight molecules is not modified.

Biodegradability, biocompatibility and low toxicity are some of the considered characteristics of the most used natural biopolymers in layer-by-layer encapsulation. Some of the most widely used natural biopolymers for probiotic encapsulation techniques are described below. Alginate is a negatively charged (anionic) polysaccharide widely distributed in the cell walls of brown algae. Pectin is another naturally occurring anionic polysaccharide since it is one of the main components of the cell wall of plant cells. Chitosan is a positively charged (cationic) polysaccharide, that is, extracted from a component of the exoskeleton of crustaceans. The main reason why chitosan alone cannot be used for encapsulation is due to the fact that it cannot work efficiently at acidic pH. This problem is corrected when using the LbL technique and used in combination with a negatively charged biocompatible polymer.

These bacterial encapsulation techniques are two powerful tools to be used in the formulation of supplements or functional foods that provide probiotics to the daily diet. 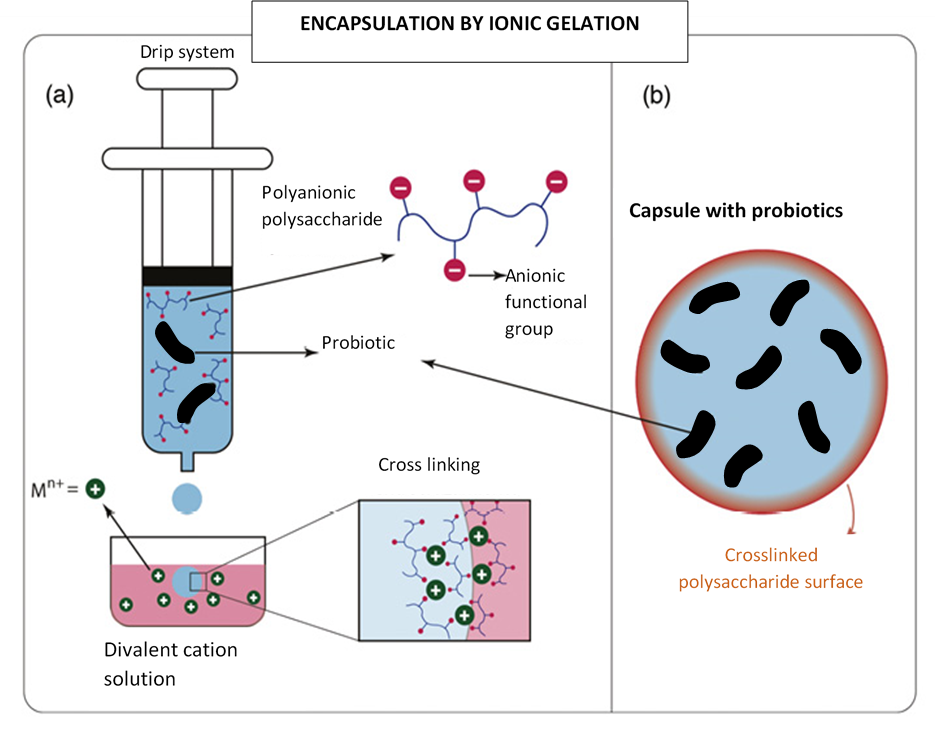 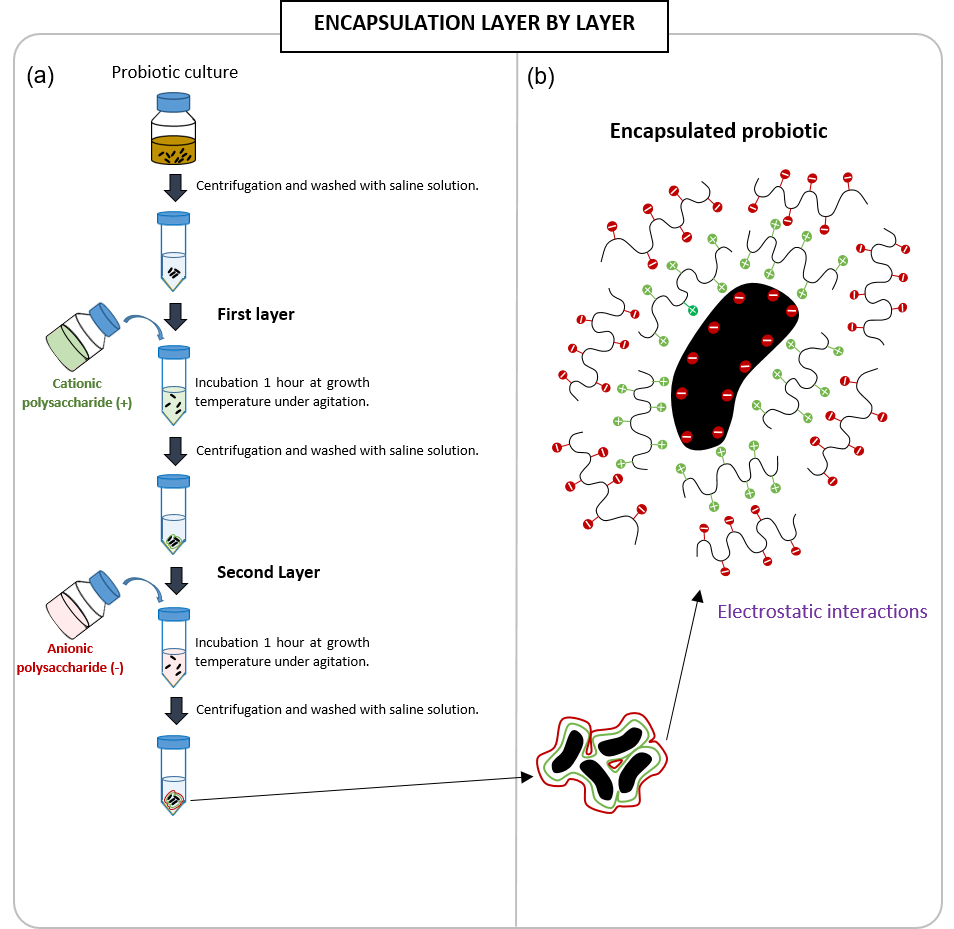 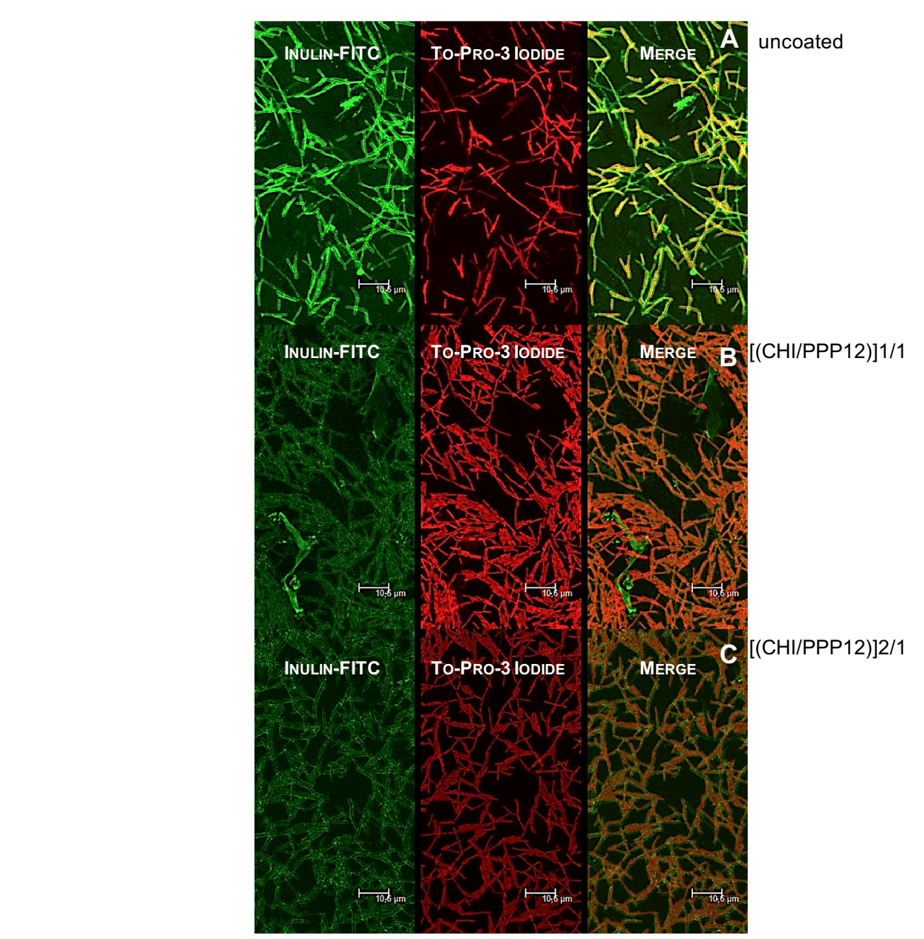