How insect pests have adapted to the domestication of fruit trees: towards biological control of aphids in apple trees?

Project title and acronym: Impact of domestication on the adaptation of sucking and biting insect pests in fruit trees: towards a biological control of aphids in apple trees? PomPuceDom

How have insects co-evolved with their wild hosts, some of them for millions of years, adapted to the new anthropized environment associated with the domestication of their host? This question is at the heart of current research in evolutionary biology to understand the adaptation processes of populations in a context of recent changes in selection pressure. Many insect pests host endosymbiotic bacterial communities that may play a crucial role in the ability of these insects to adapt to their environment, for example in the resistance to insecticides. How did this community of endosymbiotic bacteria change during the colonization of the domesticated host plant by their insect pest? This question remains little explored, especially on large spatial scales through the geographical distribution of insect pests. (Photo: Ashy apple aphid, Dysaphis plantaginea)

The PomPuceDom project aimed at understanding the impact of anthropization, more particularly domestication, on the adaptation of the ash aphid to its host, the cultivated apple tree. A crucial first step to this problem was to: 1) to trace the evolutionary history of the apple aphid in Europe, North America and North Africa using population genetic approaches, 2) to test whether the colonization of the apple aphid on its domesticated host, the cultivated apple tree, may have resulted in a change in the composition of the endosymbiotic bacterial community associated with the apple aphid.

The beneficiaries of the project include academic partners, the scientific community in evolutionary biology, and in particular working on rapid population expansion processes, and on aphids, the general public and non-academic partners (FREDON, GRAB) working on the development of reasoned control methods for aphids.

Understanding the colonization mechanisms of insect pests in the face of recent changes in the Anthropocene is a major challenge for the coming century, which has recently seen the emergence of insect pests through the intensification of global trade and climate change. At a time when the use of genetically modified seeds resistant to pests is being debated, this project is part of a central issue which is to improve and guide the practices and techniques of future sustainable and reasoned pest management programs in agrosystems. (Photo: Ashy apple aphid (Dysaphis plantaginea) on a cultivated apple tree, Jonagold variety © 2020, Amandine Cornille)

This project was a lever for obtaining ATIP-Avenir funding led by Amandine Cornille on the genomic basis of adaptation in aphid-apple interaction, which also allowed A. Cornille to create her team, including a PhD student and a postdoctoral fellow, as well as several undergraduate and graduate students. This project also allowed A. Cornille to be involved in a European Inter-regional project on the development of reasoned control methods against the apple aphid (PROVERBIO).

In terms of perspectives within the framework of the university, a conservatory and experimental orchard of wild apple trees is set up in Paris Saclay to understand the co-evolutionary dynamics of the fruit-pest interaction. (Photo: Wild apple trees (Malus sylvestris) in the greenhouse before their transfer in the fall of 2020)

==> The researcher explains the project and its RESULTS in VIDEO 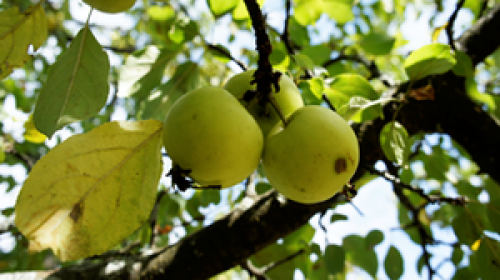